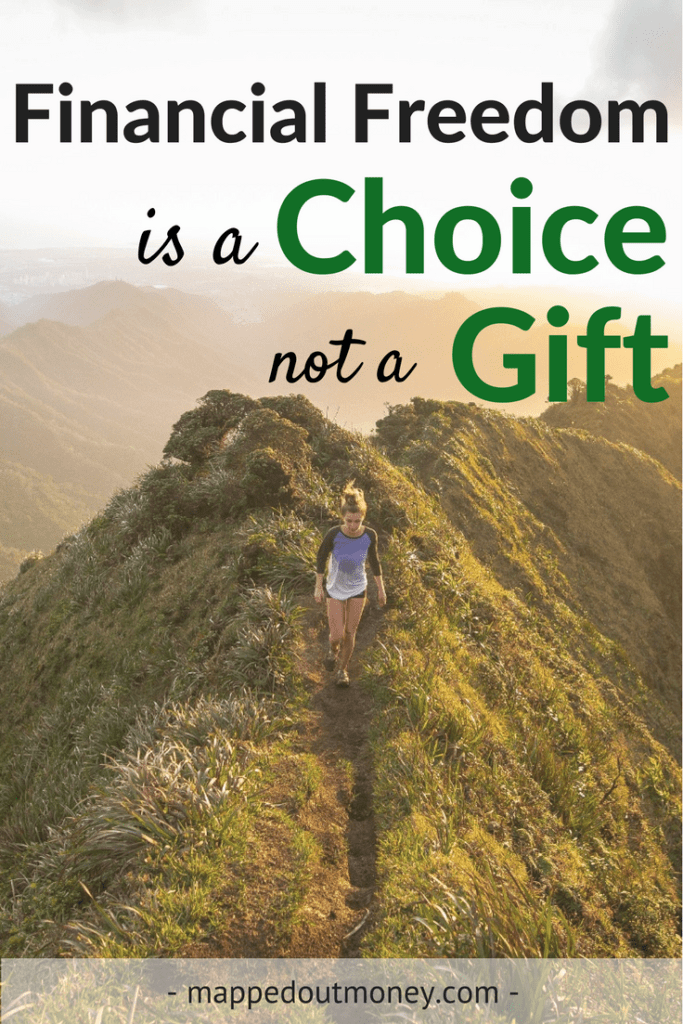 A few weeks ago I was sitting in the lobby of a hotel in Houston TX. I had been working on my laptop for a few hours when the 20-something girl behind the desk asked me what I was working on.

I told her that I help young people believe they can actually choose financial freedom.

We talked for a few minutes about money and how hard it is to learn how to manage it.

Then she said something funny.

“Well, it’s not like I’ll ever be financially free or whatever, but I’d like to at least get out of debt,” she said.

And that made me really sad.

This girl had already told herself the lie that she could never reach a place with money where she felt free. Where she felt at peace. She hadn’t even hit 30 yet, but she had already settled for a financially burdened life.

We think that financial freedom is a gift you receive or a place that you reach. We think it either happens to you or it doesn’t. You’re lucky enough to find it or you’re not.

But that simply isn’t true.

What Helps You Achieve Financial Freedom

I know that sounds weird to say. That you just choose it.

After all, if you could just choose to be financially free, wouldn’t you?

But that’s not exactly what I’m talking about.

Let’s look at this another way. Here are all of the potential things that could have an impact on your success with money.

You’ll notice that some of these actions are passive and some are active.

Being born into a good family and in a good location are examples of things that happen to you. But working hard and choosing your friends wisely are actions that you take.

And of course, you don’t need to have all of these things to gain financial freedom. These are just possible routes that lead there.

However, there is one of these that every single person who has financial success must do.

Choice Is The Only Consistent Variable

Even if you are a trust fund baby or won the lottery, making choices is still a major factor in the equation.

As I’m sure you know, tons of people win the lottery and go bankrupt a few years later.

And there are plenty of people who inherit the family business and run it into the ground.

There are also lots of kids whose parents paid for college, helped them get a nice place to live, and set them up for future success and yet the kids can’t even hold down a decent job.

In fact, every person in the entire history of the world who is financially successful did so by making positive financial decisions. They did it, by choosing to take small actions every day that set them up for success.

No matter where they started on the path, they chose to spend less than they earned, invest wisely, and not go into debt.

They chose to work hard for their money and spend it on the things that truly mattered to them.

Regardless of your starting situation in life, the choices you make always matter. It’s the only variable that stays consistent across all forms of financial success.

The problem though is that most of us either don’t believe this, or we don’t want to believe this. Because if this isn’t true. If financial freedom isn’t something you choose. If instead, it’s something that just happens to you.

Then we’re off the hook.

We can just blame something or someone else for our financial issues, and it’s all good. But there’s a problem with that too…

It’s easy to point the finger at someone or somebody else, but the issue is that even if you’re right, it doesn’t solve the problem.

The problem is that you have financial struggles.

But the cold hard truth is nobody cares.

The problem with complaining, is that nobody cares.

But it’s the truth.

People care about themselves. People care about what directly impacts their own life. So when you complain, they may listen, but they probably aren’t going to care enough to actually do something for you.

Let me ask you this.

Have you ever gotten anywhere financially by blaming someone or somebody else? Maybe it was your parents for not teaching you, maybe it was the school system for not explaining student loans to you. Or maybe it was your crappy boss for not giving you that raise.

Whatever it is. Did you complain one day, and then all of sudden, have success?

Choice Is The Most Controllable Thing

You don’t have any say in where you were born, how your parents raised you, your natural tendencies, or your God-given talent.

The only thing you have control over is what you do from here.

But that’s just not the case.

Sure, talent matters and some people do have a head start. But remember, nobody cares and you can’t change that.

The reason I harp on choice so much is because it’s literally the most controllable variable in your financial success.

You can choose to be average at your job, spend more money than you make, and take out loans for everything. Or you can choose to save money, live below your means, and work your face off.

The choice is yours.

I’ll Leave You With This

I have no choice about whether or not I have Parkinson’s. I have nothing but choices about how to react to it. In those choices, there’s freedom to do a lot of things in areas that I wouldn’t have otherwise found myself in.

Recognize that the only path forward is by making choices. That’s the only way you can have the financial freedom you want.

If you’d like to learn super practical ways you can start choosing financial freedom. Sign up for my FREE 5 Lesson Email Course on Choosing Financial Freedom.