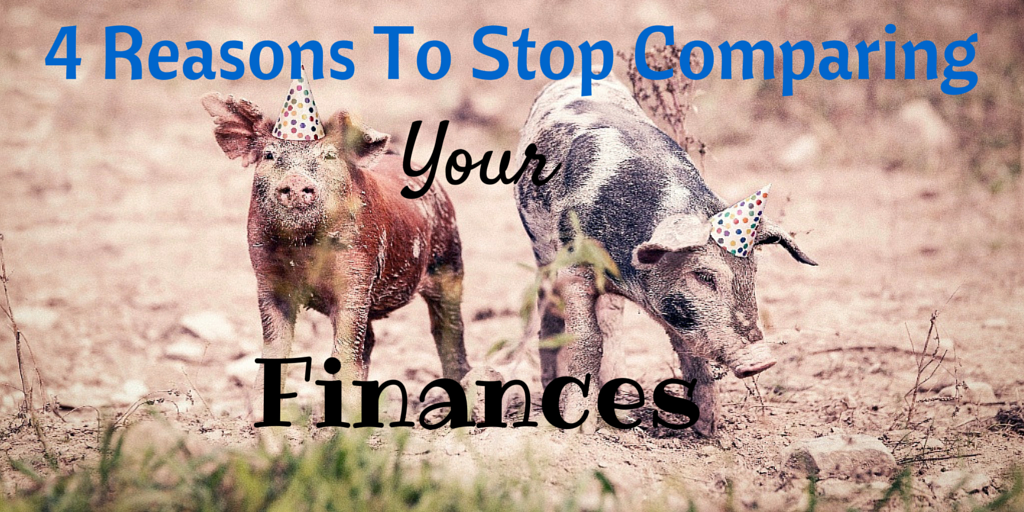 We all make comparisons every single day.

We look at our friends, our family, the people we work with, and even the TV stars we watch on Netflix.

We’re constantly comparing the haves with the have-nots. And most of the time we put ourselves in the have-not category.

But did you know that making comparisons is actually extremely harmful? And most of the time the comparisons don’t even make sense.

I’ve put together 4 reasons for why you need to stop comparing your finances with other people immediately. Comparing yourself with others is detrimental to your financial health and won’t help you one bit.

Let’s take a look at the first reason you need to stop.

Many of us see the guy in the cubicle next to us purchase a new car or come in with the latest iPhone and think “wow, he’s got so much money.”

Maybe your sister is always taking nice vacations or purchasing a house long before you’re able to.

Or it might be as simple as your friends always going out to eat while you barely have enough money to buy groceries.

What you must remember, is that what people have and do tells you nothing about their financial situation.

During the 3rd quarter of 2014, 85% of all new car purchases were financed. That is an astounding number.

And if that isn’t bad enough, 27% of new cars were leased in 2014. This means 1 in every 4 new cars that left the dealership was rented. The odds are extremely high that your buddy in the cubicle next door doesn’t actually own his brand new car.

Try to remember that when someone buys a new car it tells you very little about how wealthy they are. More than likely, it just tells you how much of a monthly payment they’re willing to take on.

The same is true for new gadgets. The average American household has $7,529 worth of credit card debt. Your friend may look wealthy with all of his fancy toys, but realistically he’s probably paying interest on them.

And of course, vacations.

It’s really easy to think that people are extremely wealthy when they take nice vacations. But USA Today put out an article this past summer showing that 46% of people who take vacations come home with credit card debt.

All of those nice beach trips and fancy cruises make us think people are wealthy when in actuality, they can’t afford any of it.

Is that 1-week trip to Florida really worth paying for throughout the rest of the year?

An Experian study found that the most common sources of credit card debt are hotels and airfare, followed closely by entertainment and dining out.

We need to realize that getting loans and renting entertainment is extremely easy in this country. And just because people look rich, doesn’t mean they are.

Often times, it means the exact opposite.

All that fancy stuff really tells you, is that they likely have a high tolerance for debt.

2. You Have Different Needs and Wants

Comparing what you do with your money to what other people do with theirs,  just doesn’t make any sense.

You don’t base your favorite color, the outfit you’re going to wear, or what you like to eat on the person you work with do you?

So why in the world do you care what they do with their money?

You might be a single college kid who’s still got 2 more years of school left. In the meantime, your brother just got married and he and his wife bring in $80,000 a year. Of course you can’t purchase a house and go to the beach like he can, and it would be stupid to try.

One of the many mistakes millennials are making today is that we expect to live the life our parents have in our twenties. We forget that our now middle-class parents were broke when they were 25 and didn’t have what they have now.

Why in the world do we think we can live the same lifestyle that we had growing up?

Obviously we don’t need to compare our situation with our parents. But what about comparing to our peers?

Again the problem is that even for people your age, you’re likely extremely different.

It would be easy to be jealous of them and complain about not being able to get our own house too. But we would be forgetting that my wife still has 1.5 years left in graduate school and we need to be putting as much money as we can towards paying for her school.

Many times even if you’re the same age, your needs are drastically different.

And not only are your needs different, but often times your wants are too.

When you start getting jealous about whatever new thing your friend just got, ask yourself why? Ask yourself if you actually want that or would rather have something else?

Most of the time if you had that money in your hand you probably wouldn’t even buy what they just got anyways.

Personal finance is personal, so stop comparing yours to theirs. You’re a different person with unique needs and wants, try and remember that.

It’s so easy to get caught up wishing we had what the people around us do. We want a house right now, a new car right now, and world travel right now.

We forget to plan for the long term.

A lot of people rush into getting homes and cars they can’t really afford. People forget that getting a home is more than the down-payment. You’ll need to have an emergency fund set aside just for major repairs that will inevitably come along. Not to mention all of the new furniture you’re going to want to get for your new place.

You need to stop focusing on what other people are getting and focus on your own goals instead.

If you want to buy a house in the next 3 years figure out how much money you need. Plan for a downpayment, some new furniture, and an emergency fund that will cover major upgrades like a new roof or bathroom remodel. Then don’t stress about what your friend is doing.

If you rush into buying something you’re not ready for yet, you could end up in deep water if something goes wrong. Just ask all of the people who bought homes at 0% down in 2007.

In 2008, many people lost their jobs and then were underwater on their homes. Not only could they not afford the payment, they also couldn’t sell the home for what they owed on it.

Take your time and be patient.

Think long term and focus on your own goals. Then forget about what everyone else is doing.

Comparing your wealth to your buddy’s isn’t good for anyone.

Joshua Becker at becoming minimalist has a great article where he discusses how comparing yourself to others is extremely hurtful, and how to overcome it.

He talks about how comparisons breed resentment. If you are constantly comparing yourself to your friends, you will begin to resent them for what they have and do.

You will never be able to develop a deep relationship with that person because there is a part of you that continues to be mad at them for what they have.

If you continue doing this, eventually you will build a wall between you and them and will ultimately push them away.

It’s just not worth it.

Comparing yourself to others doesn’t add value or joy to your life. It’s only negative. It drives you to focus on what others have that you do not.

The big problem with comparing is that you can only control one life. Yours.

You have no control over what other people do. So stop focusing so much of your energy on other people and their lives.

Instead, focus that energy on improving your own life and making it the life you dream of.

Joshua Becker ends his article with some great advice.

If you must compare, compare with yourself

Stop focusing on what others are doing and start trying to make little improvements in your own life. If you want to travel. Don’t be jealous of your friend who just got back from that 2-week European tour.

Instead, start asking yourself what you can do to start planning your own 2-week trip.

By focusing on self-improvement instead of making comparisons, you will make huge strides towards financial freedom.

Question
Is it hard for you to stop comparing yourself to others? Write in the comment section below about the things you want that your friends seem to have, and why that may be misguided.