I teach in the children’s ministry at my church and as you can imagine, I see some pretty funny stuff. But one of the coolest things I’ve seen is this one little boy.

He’s 4 yrs old and wears a superman costume almost every single week. I’m talking, head to toe, cape and mask, zooming around kids church with his arms stretched out.

He’s unashamed. He knows what he wants. And he goes after it.

He reminds me of one of my all time favorite memes. 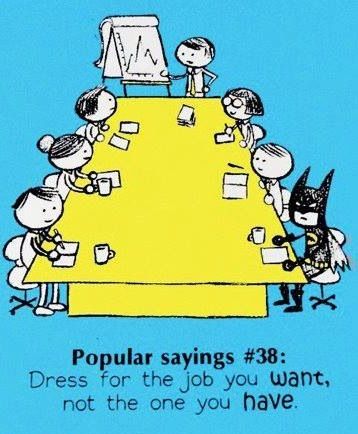 See, he’s got something that we don’t.

He still has his dreams. He doesn’t care what everyone else thinks. He wants to be superman, so he does the only thing he knows to do: dress like superman.

At some point along the way to growing up, we stop chasing our dreams. You and me, we give up.

But that little boy, he’s still got it.

And he’s taught me quite a bit about not giving up.

I know it sounds crazy, but I think we could all use a little more 4 yr old.

Kids Dream Big: Nothing is Impossible

Ask a kid what he wants to be when he grows up and I’ll bet you a million dollars that it won’t be “sitting in a desk chair at a job I hate for 40 years so that I can come home and semi-enjoy the weekends.”

No, normally it will  be something so big that most adults will chuckle inside, like the president of the United States, a pro athlete, an astronaut, a musician, or a movie star. Kids don’t worry about how realistic those things are. They just stay completely honest about what they truly desire.

Now I know the odds of becoming a pro athlete or movie star are slim to none. I get that. Heck, if you would’ve asked me what I was going to be when I grew up I would have said a rock star, and that didn’t happen!

But my interests changed and for most kids, their interests will change too.

But here’s the problem. Along with interests changing we let our ability to dream change with it. We start believing that certain things are impossible or that it’s just not for us. We start to believe lies like “sure, they can do it, but that’s not for me.”

This leads us to accept jobs and careers that we hate.

And that amount is only increasing.

I believe that some part of it is because we’ve given up on our dreams. To see what I mean, check out this great clip below from Up in the Air.

We give up on our dreams. We settle.

And I’m not just talking about careers either.

You see, we’ve even started to give up on our dreams in other areas of our lives too. We don’t travel to the places we want to go. We can’t afford to live where we want to live. And we can’t go and do the things we want to do.

We settle. We’ve stopped believing that we can actually do things that we put our minds to. And we waste so much time and money on everything else.

We try and cope with our unhappiness by spending money on things that we think will make us happy.

And in the process, we spend money on stuff that we don’t really want or need at the highest level. We trade our money for things that we sort of want and it keeps us from reaching what we truly want.

Let’s say Bob and Betty Joe dream of taking an Alaskan cruise for two that last 14 days. It’s going to cost them $4,000. So how could they possibly make the money in time for their anniversary in 6 months?

Well, first they cut the cable bill. The average American pays over $100 per month for cable. They get rid of cable and get Netflix instead for $10 per month. Six months at $90 per month saved gets them $540.

Next, they decide to scrap their fancy iPhones and the $150 cell phone bill. Bob and Betty switch to Republic Wireless and now pay $25 per month for both of them. This gives them an extra $125 per month. And after 6 months that turns into $750. Which puts the total up to $1,770.

At this point, Bob and Betty could keep cutting, but they would rather just pick up a side gig on the weekends instead. So they both get minimum wage jobs at local coffee shops on the weekends. They work their normal job during the week and found a side job to do for just a little while in their extra time. They both work 8 hours every weekend making $6 per hour after taxes and brought in an extra $2,304 after 6 months.

This puts the total saved after six months up to $4,074. Time to book that cruise.

See how that happened? By giving up things that they really didn’t want anyways, they were able to afford their dream anniversary trip. They didn’t live in a shack. They didn’t stop doing things with friends. They only made an extra $6 an hour. And they did it in only six months!

Now is that a lot of work? Yes.

But can you make your dreams happen if you want it? Absolutely.

The problem is you just don’t want it bad enough.

Stop Wasting Money on Stuff That Isn’t Your Dream

If you really want it, you’ve got to stop wasting money on things that don’t get you there.

Sure you’ve got to eat, provide for your family, and sleep under shelter. But you only get one life on this planet, do you really want to waste your money on stuff that doesn’t help you reach your dreams?

Maybe this means going back to school in your 40s because you just found out what you really want to do. Maybe it means working hard at your 9 to 5 so you can chase your dream of building a business on the weekends and weeknights.

Whatever it is, don’t give up. Do you want to be a chef? Stop paying for cable every month and use that money to buy an online cooking class.

Do you want to be able to travel the world? Quit spending so much money going out to eat and start saving for that backpacking trip across Europe.

Sure, it’s not easy. It’s never easy. Nothing worth anything is easy. It’s going to take hard work, and it won’t always be fun.

But it’s totally worth it.

Get back to your roots and think like a kid.

Dream big. Nothing is impossible.

You must understand this, I can give you tips and tricks all day long about investing, saving, and getting rid of debt.

I can walk you step by step through how to set up a retirement plan and show you 10 different ways to earn extra money on the side.

But if you’re not clear on your dreams. If you aren’t clear on why you want it. And if you give up and settle, none of my help matters because you won’t do anything with it.

You’ve got to decide that your dreams are worth it. That being like a kid and thinking big thoughts, regardless of what you’ve heard, is worth it.

This is the essence of being smar with your money. Mapping out your money is about getting rid of all the crap that you don’t want or need so you are free to use your money to chase after what you truly want.

Money is more about mindset and clearly defining your priorities than it is about saving tips and tricks to squash debt.

If you want to be wealthy you’ve got to learn from a 4-year-old.

So go put on your superman suit and zoom around your room for awhile. Stop wasting your money on meaningless stuff, and start chasing your dreams harder than ever.

Be sure to leave a comment below telling me what dreams you want to chase. Or if you’d rather keep it more private, shoot me an email, I’m all ears.