Entitlement is an overarching issue in this country. Millennials get a bad rap for feeling entitled, but unfortunately, this problem transcends generations.

Webster defines entitlement as: “the feeling or belief that you deserve to be given something (such as special privileges).”

The problem is, you’re entitled to very few things in life. Free speech and the right to a fair trial are two examples if you live in America. But when it comes to a high-paying job, a nice house, a smartphone, a reliable car, a vacation, or even just going out to eat, you don’t deserve any of that. You’ve got to work for it.

Ultimately, entitled people feel like they deserve something regardless of how much work or effort they’ve put in. An entitled mindset will quickly sabotage your fulfillment and limit your success. And for that very reason, entitled people will never build monetary or spiritual wealth.

Let’s look at a few common statements that will keep entitled people poor.

1. I’ve Done This (fill in the blank mediocre task), So I Deserve That

This is the most common belief people hold. They believe that because they’ve accomplished something (be it big or small), they somehow deserve something else in return. What compounds the problem is that the majority of people feel entitled to something significant after accomplishing mediocracy.

“I went to college, so I deserve a good job”

“I’ve worked here for 5 years, so I deserve a good raise”

“I’ve put in my time for 40 years, so I deserve a good retirement”

Why? Why do you deserve it over anyone else? What sets you apart from the other 1.8 million people who graduate college every year? 36% percent of people who have a bachelor’s aren’t even working jobs that require a degree. Why do you think you’re entitled to a good job just for getting through school?

But let’s put all of that aside. The issue I want to address is why this type of thinking will keep you poor.

First and foremost, an entitled mindset doesn’t give you the motivation to make forward progress. When you submit to an entitled mindset, you’re going to be disappointed when you don’t receive your unjustified reward. And this disappointment will ultimately prevent you from putting in the work in future.

If you want to be successful, you need to stop expecting something for nothing. Instead, you need to focus your energy on making forward progress every day. Entitlement will only cripple your efforts.

2. My Parents Live This Way, So I Should Too 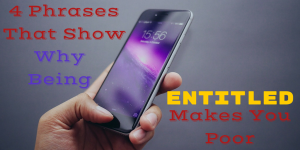 A lot of people think this, especially twenty-somethings. Many of us grew up in good homes, with nice cars, and yearly vacations. We’re used to buying what want at the grocery store and not thinking about how much going out to eat really costs. Then we get through college and have to start paying for stuff on our own. All of a sudden we realize how expensive the life that we grew up living really is.

(I say “we” because I’m a twenty-something too. I’m speaking to myself here as much as I am to you.)

It’s easy to get used to living a certain way and it’s very hard to change that when you’re finally out on your own.

But, like number 1, this belief will also keep you poor if you don’t get rid of it.

The fact is, your parents didn’t get the life they have now easily. They didn’t always have good cars and nice vacations. My parents talk about how in their first few years of marriage they didn’t have hardly any money and slept in a tiny apartment. It took awhile before they were able to do what they can now.

But many young people either forget this, or they haven’t ever thought about it, to begin with. If this is you, I encourage you to talk to your parents about what their life was like when they were in their twenties. I bet it looked very different than it does now.

So what do you do when you think you deserve it?

You put it on credit. You buy cars you can’t really afford. And you don’t save because there’s no room left in the budget for saving after you get all of the stuff you “deserve”.

If you want to be wealthy you’ve got to tough it out for a little while and save some money. You’re going to have to give up some of the luxuries you had at home, and you’ve got to start making your own way.

Don’t compare your life to your parents. You’re in a totally different spot and you need to focus on doing the best you can where you’re currently at.

I’m not saying that older people don’t deserve respect or that younger people shouldn’t listen to them for wisdom or guidance. What I’m saying is that people need to get rid of the lie they tell themselves when they believe they should have something nice because of their age.

“I know I can’t really afford it, but ya know at 58 I think I finally deserve a new car”

“Yeah it’s expensive, but at my age, I think I deserve just a little something”

It’s just a lie that we tell ourselves. It’s a way to make up a false achievement so that we can treat ourselves to a false reward. And I’m not saying you shouldn’t ever treat yourself. But I am saying when you do, it should be for a real reason, not just because of your age.

4. I’ve Worked Hard, I Should Get This

This one is tough. Because there is some truth to it.

If you work hard, you should get a fair wage. I wholeheartedly believe that. But the difficult part comes in 2 ways.

The first one makes sense right. You may think that you’re working really hard or that you’re worth a certain amount, and to you, it feels like you couldn’t possibly work harder. But to someone else (like your boss), it may look like you’re really not working all that hard. If you feel like you’re working your tail off and not seeing any reward, you probably need to first really examine yourself to see if you’re actually working all that hard. Then get some people you know and trust and ask them what they think of your work ethic. If you still feel like that’s not the problem, it’s probably time to ask your boss (or whatever you’re working hard towards) about what they think constitutes “good work”.

If you feel like you’re working your tail off and not seeing any reward, you probably need to first really examine yourself to see if you’re actually working all that hard. Then get some people you know and trust and ask them what they think of your work ethic. If you still feel like that’s not the problem, it’s probably time to ask your boss (or whatever you’re working hard towards) about what they think constitutes “good work”.

Of course, the other problem with hard work is that it often takes awhile. People  frustrated because they think they deserve the fruits of their labor shortly after the work. But many times, that’s just not the case. Most successful people worked hard for years before they saw the true rewards.

If you’re working hard but just feel like you’re not reaping any reward, you might just need to hang in there and stick it out a little longer. Your reward might be just around the corner.

Don’t Blame Anyone But Yourself

If you take anything from this article, understand that you’re not entitled to success or wealth, and if you don’t achieve what you want, it’s no-one’s fault but your own.

Every generation is a product of the generation before them, but that doesn’t give you an excuse. You can’t blame them for not achieving what you want.

By thinking you deserve something or that it’s someone else’s fault, you’re just limiting your own possibilities. You’ve got to realize that you’re the only one who can do something about your situation. No one is going to give it something to you or make it better. But if you think they will, you’ll never work. And if you never work, you’ll never achieve.

You will stay poor. Poor in money, poor in health, and poor in relationships. Whatever area you feel entitled to, you’ll stay poor.

You’ve got to go out there and work for it.

You have the same 24 hours in a day that everyone else on the planet has. And lots of people break world records, create million dollar companies, travel the world, spend time with their family, and lose weight. You’ve got the exact same amount of time they do. So don’t blame anyone else for not getting what you want.

If you want something, chase it and work hard for it. But don’t think you’re entitled to success. 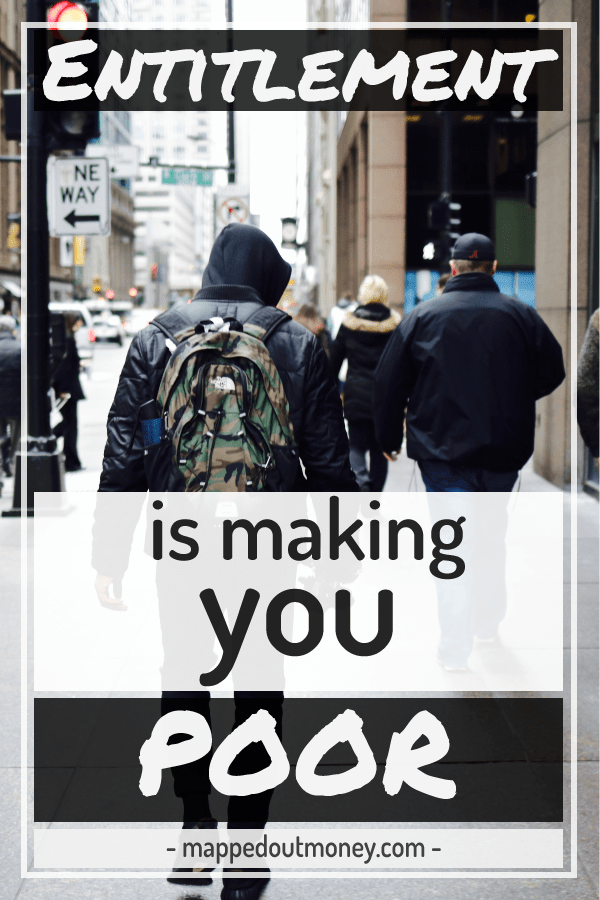